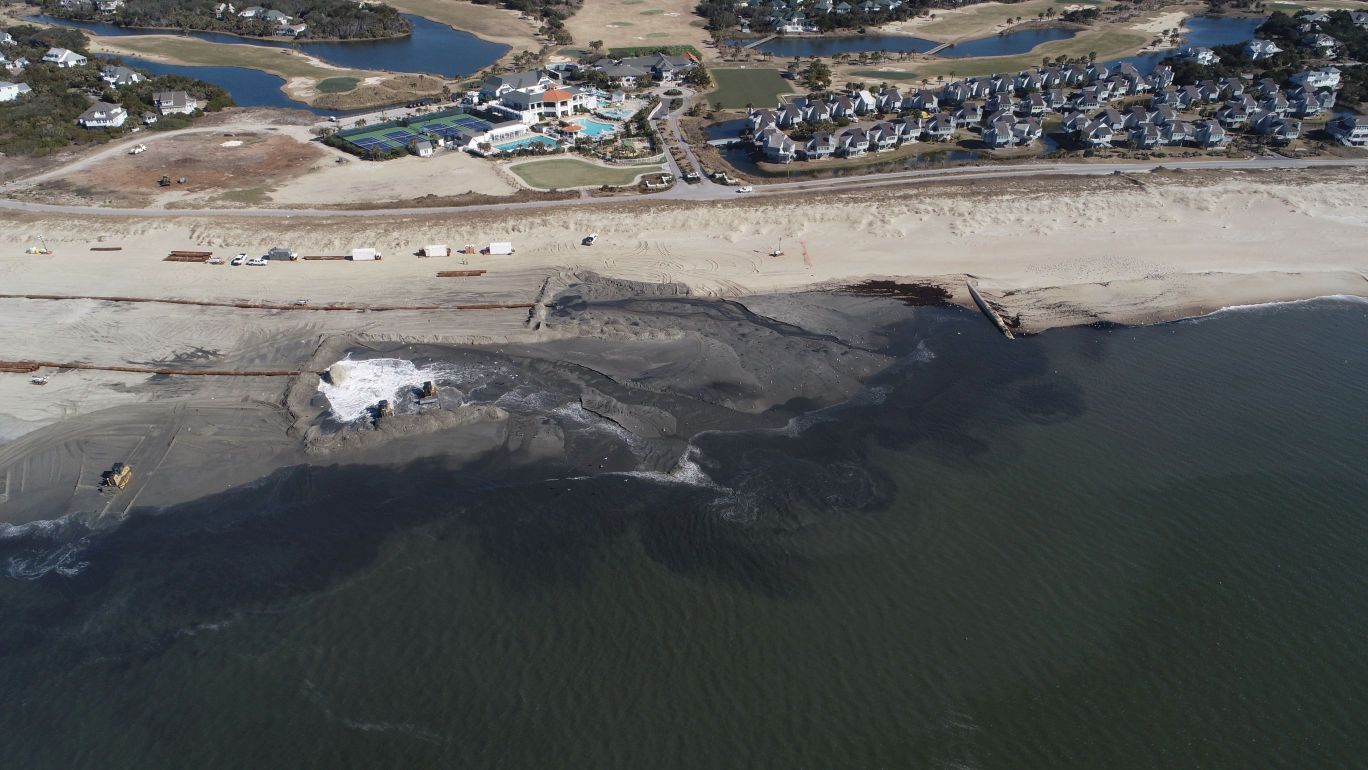 The U.S. Army Corps of Engineers, Wilmington District has contracted with Marinex Construction to provide maintenance dredging of the Federal navigation channel.  The dredging will be accomplished with a hydraulic cutter suction dredge.  Approximately 1,000,000 cubic yards of the dredged material will be placed on South Beach on Bald Head Island.  NOTE: The photo above is from the last maintenance project and was taken in January 2021.

*Start and end dates are rough estimates since weather and mechanical impacts can change the project schedule.

WHAT TO EXPECT: The beach will remain open except for the areas of immediate construction where a 1,000-foot section of the beach will be closed at any given time when nourishment is underway. Due to the many variables associated with the construction progress, such as mechanical or weather impacts, it is extremely difficult to forecast when the contractor will have a particular section of the beach closed. There will be a large pipe that carries the sand slurry down the beach and heavy excavation equipment which will be working 24/7 until the project is completed. There will be noise from the large machinery 24/7, this will include the “back-up signals” from the machines and lighting which are required for the safety of the crew. Sand ramps will be spaced along the beach (approximately every 400 feet) to allow beachgoers to walk over the pipe and access the ocean.

Please help the construction crew by being mindful of the construction fencing and signage. Do not go beyond any signage or barriers as doing so may place yourself and others in harm’s way.

The map below shows the approximate location for the starting point and ending points for sand disposal on South Beach, the beach accesses, the location of construction, and photos will be added as the construction site moves down South Beach.

January 13, 2023 – Sand disposal has almost reached Beach Access #15. Operations were suspended today for weather and mechanical issues, as of this morning they were hoping to start back up later this afternoon.

January 10, 2023 – Several aerial photos of the project were taken over the weekend. View a slideshow of them HERE.

January 6, 2023 – Sand disposal is currently located just west of Beach Access #13 which is across from the Villas.

December 21, 2022 – Marinex Construction is expected to suspend operations from December 22 through December 28, 2022, for the holiday.

December 7, 2022 – Marinex is expected to have a line to the island today and could start pumping sand on the beach as early as Friday, December 9, weather permitting.

December 1, 2022 – Village staff met with the Army Corps of Engineers and Marinex Construction staff for a pre-construction meeting. Marinex reported that construction (sand pumping) on the beach is expected to begin in 10 days, weather permitting.

November 30, 2022 – The Savannah Dredge arrived and is located next to Battery Island.

Q: Why isn’t the sand going in front of the Shoal’s Club when it is needed there the most?
A: Since this is an Army Corps of Engineers project solely funded by the federal government through Congressional appropriations, and the sand source per the Sand Management Plan (“SMP”) is the sand dredged from the federal navigation shipping channel to ensure the channel remains open, the Village does not have any direct authority over the project and where the sand will go. The Village can ask and did so last time the Corps did this project in 2021 and at that time the project budget funded by Congress and the quantity of sand dredged from the channel allowed for the sand to be placed from the west end of South Beach down near the Shoals Club.  For this Corps project, the funding appropriated and the volume of sand to be removed from the shipping channel was not enough to the extent that the Village considered expending Village funds to add additional material so it could get down in front of the Shoals Club as an additional contract to the Corps contract while the dredge was here, but decided against it at the recommendation of the Village’s coastal engineer primarily because the quality of sand did not justify the cost share the Village would have to pay.

At this point, the Village is working on the permitting to borrow sand from a new area of Jay Bird Shoals and is still pursuing a permit for sand from the adjacent Frying Pan Shoals.  A future privately funded Village beach nourishment project is planned for the winter of 2025 that will look to address the erosion at the east end of south beach and this topic will be discussed at the annual Council Retreat in February (7th  and 8th).  Our coastal engineer will be updating the Council on the status of the shoreline management program to include a discussion on details of the future Village beach nourishment project and erosion mitigation efforts specific to the area at the Shoals Club.

To date, the Village has worked in assisting the Shoals Club and its engineer with obtaining state permits through the Division of Coastal Management for the installation of temporary erosion control structures (i.e., “sand bags”) over the summer that have helped to protect the private infrastructure and minimize the ongoing erosion.