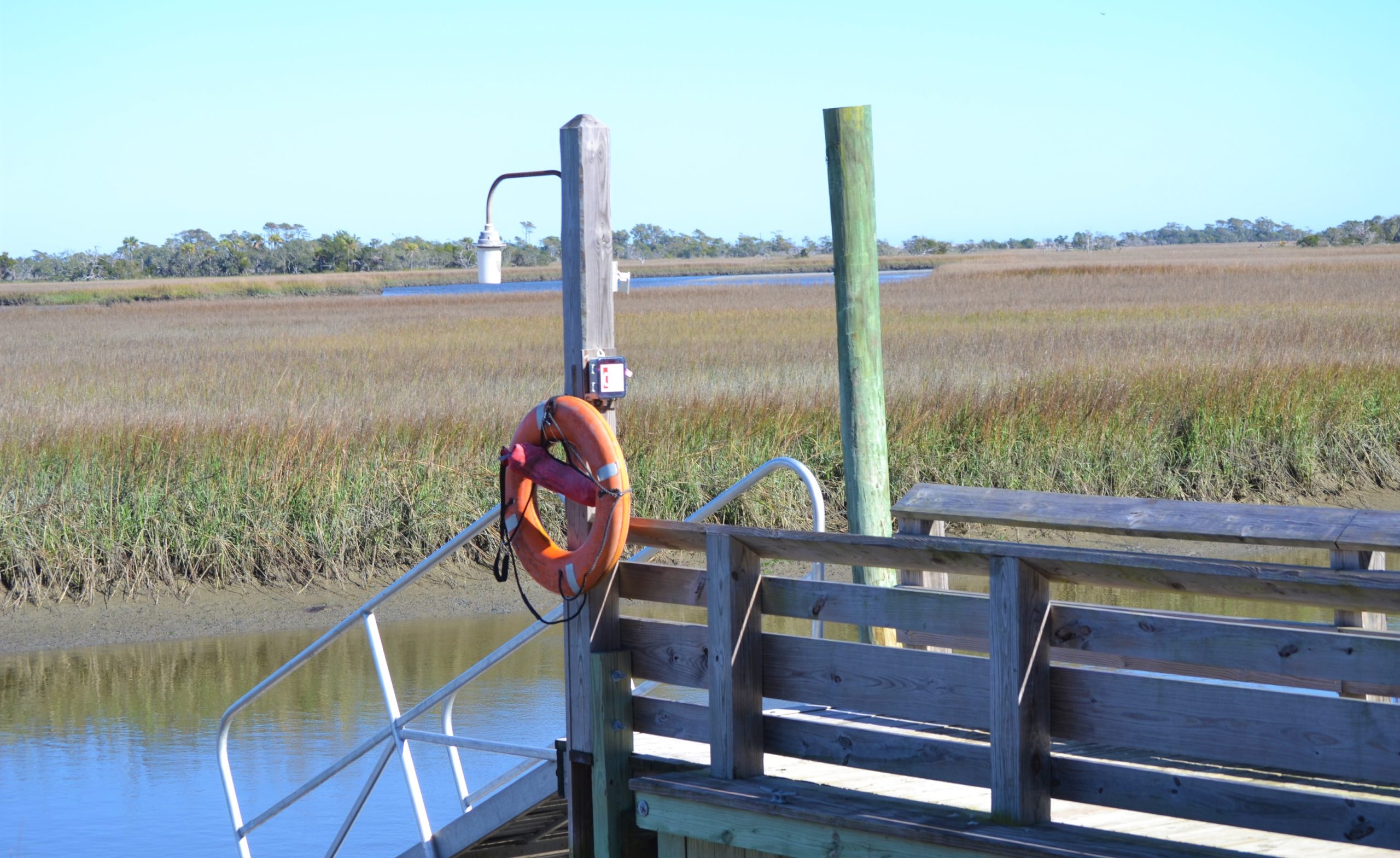 Below are a few projects and initiatives that are taking place on Bald Head Island. Information about these projects will be updated as the status changes. Shoreline protection project information can be found HERE.

If you have a question about any of these projects or are not finding the information you need, please contact public.information@villagebhi.org.

Contractor Services Improvements – Construction on the building is complete and contractors have moved into the new storage units. The Village is in the process of moving the old CONEX storage boxes off of the island. All contractors were to be relocated by June 15, 2022. Additional grading and stormwater installation are ongoing. Plans are in place for landscape design.

Why was so much vegetation cleared between the new Contractor Services pad and Federal Road? The State’s stormwater permit required a stormwater basin and required some clearing. Caution was given to minimize the amount of vegetation removed with the usual emphasis on the protection of the larger live oaks. The plan is to let the vegetation (understory) grow back to the extent that it will offer some buffer in the long-term and to use the material removed for the basin to build a berm along Federal Road which will be planted.  This project is still in progress and the current condition is not what the Village expects the area to look like in the long-term. The upcoming landscaping project (see below) will include plantings along the berm behind Contractor Services along Federal Road.

Click HERE to view a copy of the site plan. The stormwater basin is indicated in red. Slides with plans and maps of the area can be viewed HERE.

Landscaping Project – At the January 20, 2023, Village Council meeting, Mr. Kim, Asst. Village Manager briefed the Council on the Edward Teach Ext. Landscaping project.  He said that the landscape contractor is expected to be on the island on January 23 to flag the plant locations.  He indicated that the contractor is familiar with the island and its processes.  They will be installing temporary irrigation in the installation area to get the plants set and take root in the first year or so.  View the current plans HERE. Planting is expected to start in February.

UPDATE: The first plants arrived on 2/2/23 via the barge. Planting will begin on 2/3/23. Several more trailer loads will be coming over in the next week or two.

ADA Beach Access – The Village has closed out the original Division of Coastal Management grant for the proposed South Bald Head Wynd ADA access and is resubmitting a new application to construct an ADA access at an alternate location which is off of Peppervine trail to the west of the existing vehicular access at Beach Access #24B. The Village has approval from the Bald Head Association and the CAMA permit and bid out and awarded this project to a contractor who will build the ADA access along with performing the annual repair and maintenance planned for several beach accesses. Construction is expected to be completed prior to the next peak season (summer 2023). Village personnel will be cleaning up and improving the parking area at the corner of Muscadine and South Bald Head Wynd and an entrance may be added on the Muscadine Wynd side for improved access.

NOTE: Until a new access with an ADA ramp is complete, the emergency vehicle accesses can be used (#11, #24B, #35, #42). BA #42 would be the shortest path to the beach. Use of the Village’s handicap beach wheelchairs is recommended, more info HERE.

What is going on with all the flags on the side of the road?
Some folks may have noticed that these flags have been around the island for quite some time.  They are marking various utility lines for the infrastructure projects that have been on-going for several years (first the broadband fiber project and more recently the Duke Energy project).   Please do not remove them.

At some point ALL the flags will be removed, but not until all projects are completed.  The Duke Energy project is almost complete, but the Village has a few other major projects that will be starting this year such as the installation of the new cell tower and the Village’s stormwater management infrastructure
projects.

When all projects are completed the Village can focus on removal of the flags, which we agree, are not the most attractive sight on the island, but are necessary to bring forth these planned improvements with minimal delay.

Beach Access Maintenance & Repair – The Village issued a request for proposals to perform maintenance and/or repair to six beach accesses prior to the 2023 peak season. The bids were awarded on December 16, 2022. Construction is expected to begin in late December 2022 or early January 2023. The same contractor will be building the new ADA access (info above). The beach accesses that will be improved or maintained include Beach Access #1, #4, #32, #34, #39, and #41. Each year the Village surveys its beach accesses to determine needs, prioritizes the ones that are in need of repair, and selects a handful to include in the annual budget. Maintenance and repairs are typically performed in late winter/early spring so that beach accesses are ready for the peak season. If you notice any repair needs at the beach accesses, please submit a service request so the Village can evaluate and address the needs as soon as possible. You can submit a service request HERE.

Marina Park Dock & Pier – The Marina Park dock and pier was severely damaged during Hurricane Isaias and has since been removed. The Village has received FEMA funding to replace the structure and is currently working with Limited and the Division of Coastal Management to receive a major permit to rebuild it. At this time, the Village is planning to relocate the structure so that there is more direct access from the park to the pier so that it does not protrude as far into the creek as the old pier, and design it as a “T” dock with the same number of slips. These plans are subject to change as the Village proceeds with the permitting process. In the meantime, the Village constructed a temporary walkway, ramp, and floating dock for folks to enjoy.

December 2022 Update: Bruce Marek, acting as the agent on behalf of BHI Limited, indicated that a CAMA Major permit will be required along with a scoping meeting to discuss with the various regulatory agencies to review the plan.  The requirement for a CAMA Major permit is due to the size of the pier & dock, although somewhat reduced in scope & footprint from the original dock design pre-Hurricane Isaias damages, but with a “commercial-use” and total square footage exceeding 800 s/f.  As part of the permitting process, the adjacent owner notifications have been sent out to adjacent property owners.

Duke Energy – Duke Energy continues to work hard to complete a multi-year power grid improvement project that will help harden our system serving Bald Head Island to storms and allow for isolation of outages and remote automatic repairs. While a lot of the visible work on the island is concluding, there are important updates to the operating systems taking place now so Duke can fully leverage these upgrades in the near future.

Duke Energy is anticipating the need for some small, isolated planned outages as they configure the new equipment. They will work to communicate this in advance to impacted customers. If you experience an outage and you are not sure if it is planned, please contact the Duke Energy outage line at 800-419-6356.

Duke Energy will be providing updates to the Village as they continue to make improvements on BHI. Those updates can be found HERE.

Stormwater Management – The Hurricane Florence Task Force provided Village staff with several recommendations regarding stormwater management. This resulted in several projects that have been budgeted and some are yet to be completed. One of the actions the Village has regularly taken is monitoring the water levels and letting off as much water as possible off the island. This is accomplished by opening the weir gate at the bypass lagoon. The Village does not have the capability to install pumps everywhere they are needed, cannot pump on private property, and is only authorized to pump when certain conditions exist.

At the January 20, 2023 meeting, Village Council meeting the Village Manager updated the council on the latest project, the #6 Bypass Lagoon. He said the project is now complete. The Village and the Club coordinated well on this effort. The work included the replacement of the existing 24-inch culvert pipe and gate on the Club side of the lagoon with a 36-inch culvert pipe and two (2) isolation gates.  This project completes the recommended changes at the bypass lagoon per the Hurricane Florence Task Force final report from July 2019.  The Village would like to thank the Bald Head Island Club and BHI Transportation for ensuring that this was a successful project.

Sandpiper Trail Road Relocation Effort – After exploring options to provide ingress/egress to properties on Sandpiper Trail where the seaward dune is encroaching onto the street, including creating an entrance/entrances off West Bald Head Wynd, the Village and the property owners are working on a road design that will allow for tram access down Sandpiper Trail to the cul de sac as an alternative. The 911 emergency access is expected to be maintained.

New Village Hall – The Village received bids for the construction of a new Village Hall on Friday, October 22, 2021. Two bids were received, and both were significantly higher than the projected cost of $1.9M.  In addition to being above budget, the lowest bidder did not submit the required bid bond and that bid was considered “non-responsive.”  Therefore, the architect and staff could not recommend an award at this time.

Wildlife Management – Deer: Over the last several years the Village has sub-contracted services to the Bald Head Island Conservancy to assist with Deer Herd Management which utilizes an immuno-contraception program. Updates on the program are posted on the Conservancy’s website at; https://www.bhic.org/deer/. Read the 2020 Darting Season report HERE.

What are the green plastic safety fences in the maritime forest? These are exclosures to protect vegetation from deer. See more information about these on the BHI Conservancy website HERE. Several were damaged from recent hurricanes and staff with the Bald Head Woods Reserve are aware of this and are evaluating options (repair/replace/remove).

Coyote: During the 2019 turtle season, the Conservancy reported that coyotes were disturbing turtle nests and eating the eggs. Several non-lethal methods were used to deter the coyotes with little success. After consulting wildlife biologists about the viability of trapping coyotes, the Village and the Conservancy worked together to obtain a depredation permit. At this time, the Village currently has no plans in place to renew or use the permit. Please see the latest efforts the Conservancy is making in studying predator behavior on the shoreline HERE.